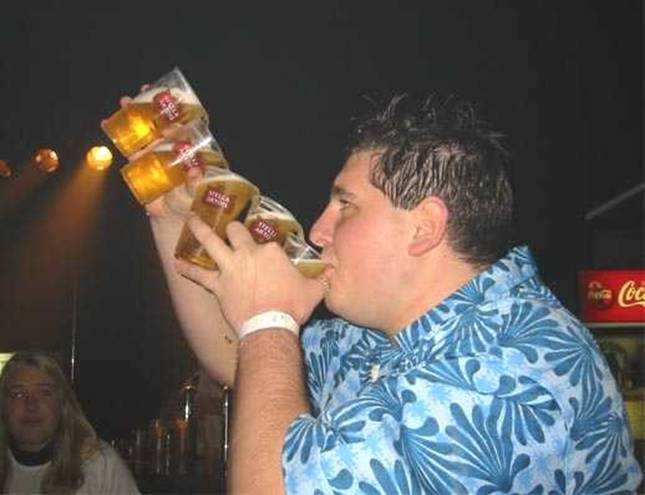 THINGS THAT ARE DIFFICULT TO SAY WHEN DRUNK:
1. Innovative
2. Preliminary
3. Proliferation
4. Cinnamon

THINGS THAT ARE DOWNRIGHT IMPOSSIBLE TO SAY WHEN DRUNK:
1. No thanks, I'm married.
2. Nope, no more booze for me!
3. Sorry, but you're not really my type.
4. Taco Bell? No thanks, I'm not hungry.
5. Good evening, officer. Isn't it lovely out tonight?
6. Oh, I couldn't! No one wants to hear me sing karaoke.
7. I'm not interested in fighting you.
8. Thank you, but I won't make any attempt to dance, I have no coordination. I'd hate to look like a fool!
9. Where is the nearest bathroom? I refuse to pee in this parking lot or on the side of the road.
10. I must be going home now, as I have to work in the morning.

I just don't understand it, an Irish footballer complained... One match I play very well, and then the next match I'm terrible. Well, said his wife, why don't you just play every other [...]
previous joke A middle-aged couple had two beautiful daughters but always talked about having a son. They decided to try one last time for the son they always wanted. The wife got pregnant and delivered [...]
next joke
- Are you sure this is british beef?
- Of horse it is! ... deschide bancul

Well, it appears our African-American friends have found yet something else to be pissed about. A black congresswoman reportedly complained that the names of hurricanes are all Caucasian sounding names. She would prefer some names that reflect African-American culture such as Chamiqua, Tanisha, Woeisha, Shaqueal, and Jamal. She would also like the weather reports to be broadcast in language that ... read all

Little Logan and his family were having Thanksgiving dinner at his grandmother's house. Everyone was seated round the table as the food was being served. When little Logan received his plate, he started eating right away.
- Logan, wait until we say our prayer, his mother reminded him.
- I don't need to, the little boy replied.
- Of course you do! his mother insisted, We say a prayer before ... read all

After buying her kids a pet hamster, after they PROMISED they would take care of it, Mom, as usual, ended up with the responsibility.
One evening, exasperated, she asked them, "How many times do you think that hamster would have died if I hadn't looked after it?"
After a moment, her youngest son replied quizzically, "Once?" ... deschide bancul

At a U2 concert in Ireland, Bono (the lead singer) asks the audience for some quiet. Then he starts to slowly clap his hands. Holding the audience in total silence, he says into the microphone...
"I want you to think about something. Every time I clap my hands, a child in Africa dies."
A voice from the front of the audience yells out...
"Then ****** stop clapping, ya ********!" ... deschide bancul

- What is the longest word in the English language?
- It is the word "smiles", because there is a mile between the first letter and the last! ... deschide bancul

As the holidays approach, my heartfelt appreciation goes out to all of you who have taken the time and trouble to send me forwards over the past 12 months. Thank you for making me feel safe, secure, blessed, and wealthy.

Extra thanks to whoever sent me the one about rat crap in the glue on envelopes 'cause I now have to go get a wet towel every time I need to seal an envelope.
Also, I scrub ... read all

A lawyer and an engineer were fishing in the Caribbean. The lawyer said:
"I'm here because my house burned down, and everything I owned was destroyed by the fire. The insurance company paid for everything."
"That's quite a coincidence," said the engineer. "I'm here because my house and all my belongings were destroyed by a flood, and my insurance company also paid for everything."
The lawyer ... read all

A cat died and went to Heaven. God met her at the gates and said:
- You have been a good cat all these years. Anything you want is yours for the asking.
The cat thought for a minute and then said:
- All my life I lived on a farm and slept on hard wooden floors. I would like a real fluffy pillow to sleep on.
God said:
- Say no more.
Instantly the cat had a huge fluffy pillow.

Depression in the age of global outsourcing: I was feeling depressed the other day, so I called LifeLine. They had recently outsourced, so I was put through to their new Call Center in Pakistan.
I explained that I was feeling suicidal. They were very excited to hear this and wanted to know if I could drive a truck or fly an airplane.... ... deschide bancul

This year, taxpayers will receive an Economic Stimulus Payment. This is a very exciting new program that I will explain using the Q and A
format:

"Q. What is an Economic Stimulus Payment?
"A. It is money that the federal government will send to taxpayers.

"Q. Where will the government get this money?
"A. From taxpayers.

One sunny day in 2005 an old man approached the White House from across Pennsylvania Ave, where he'd been sitting on a park bench. He spoke to the US Marine standing guard and said, "I would like to go in and meet with President Bush."
The Marine looked at the man and said, "Sir, Mr. Bush is no longer president and no longer resides here." The old man said, "Okay" and walked away.
The following ... read all

I was out walking with my 4 year old daughter. She picked up something off the ground and started to put it in her mouth. I took the item away from her and I asked her not to do that. "Why?" my daughter asked. "Because it's been on the ground, you don't know where it's been, it'sdirty and probably has germs" I replied. At this point, my daughter looked at me with total admiration and ... read all